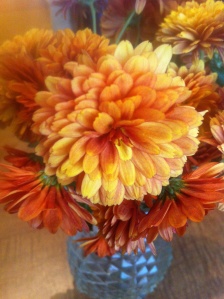 Just some lovely flowers from my garden (aka the only things I haven’t killed yet).

Because I like singing, I have a hard time studying to music with lyrics. However, thanks to Cimmerian Tales, I’ve gotten much better at writing to music with lyrics. I edit to classical composers like Brahms, Ravel, Schubert, Chopin, and Debussy (there’s a pattern there). And I rilly like house/techno/trance/dubstep for writing and editing. On loop.

What are some of your favorite CDs to listen to while studying or writing? Do you study or write to music or must it be absolutely silent?

“Noah!” I scream and catch the back of his collar, choking him to a halt. “Those pennies’ll be hot.”

“Well try thinkin’ for once in you life.” I’ve gone too far. He’s sniffling and smearing his runny nose all over his new ground suit. I sigh and my helmet fogs up a little. Putting a gloved hand on his shoulder, I try to pull him towards me, but he shrugs me off. “Just wait a few minutes, all right? Grandma’ll be mad if you burn your gloves.”

I walk off a couple yards, kicking rocks as I go. I like how they sound bouncing off the rusting metal of the old scrap yard. Howie and I found this place a couple years back, before he left for the mining colony. The sky is an impenetrable brown haze. I can’t tell where the sun is, but the info screen in my helmet says Noah and I have ten minutes before we need to high-tail it home for dinner.

There’s all sorts of things in the scrap yard. Some I recognize from school like cars and refrigerators, others I just guess at. It was a game Howie and I used to play.

And he’d say something like, “Honestly, Clarabelle! Can’t you tell? That is a tarfunkel. Obviously.”

I’d laugh and ask what it did. He always knew.

I hug myself as best as one can in a ground suit. It didn’t help. If I could see the stars, I still wouldn’t be able to find the rock Dad shipped Howie to. At the time I was grateful for Howie to have a job. I thought it meant we would have a life together.

A whistle reverberates through the yard, echoing against the walls of metal. I turn around but I’ve wandered far in the yard. My feet send clouds of dust pillowing into the air as I push myself as fast as I can. The whistle sounds again, closer. I skid to a halt before I run into a large metal cylinder. I’ve turned the wrong way.

“Noah!” I scream, but the whistle drowns out my voice.

The problem isn’t that there’s a ghost standing in front of me or that I have to help him move on. I’ve gotten used to that since Jin spared my life and turned me into his ghost-ferrying, soul-reaping apprentice.

The problem is that I know him.

Roger Lowry goes to my school. Or, he did, I guess.

He was in my chemistry class last year. We were lab partners. He’s only seventeen and now he’s dead, his body crumpled over his steering wheel. His ghost is looking at me with the lost expression common of the recently deceased. It’s one they all wear, even before they realize they’re dead.

“My car,” he says, eyes flicking to the tangled mess of metal that used to be his black BMW. “My parents are going to kill me.”

If Jin were here, he’d probably laugh at that. For the first time since I got the text message telling me to go this one alone, I’m almost glad he’s not here. Almost. Except that inside the car I can see far too much mangled flesh for my liking, and I wish I could hang back and let Jin do the dirty work. I’m not squeamish but it’s not pretty. Roger is only seeing the car for the moment, blind to the thing he doesn’t want to see.

“I think they’ll understand,” I say. I’m pretty sure they’re going to have bigger things to worry about.

Roger looks at my car, parked on the shoulder across the street and creases his brow. “Wait,” he says, tilting his head. “What are you doing out here, Drea? You weren’t at Matt’s party.”

It’s a reasonable question. It’s six in the morning on a Saturday in the middle of June. We’re standing on a curved underpass beneath the mostly-empty freeway. I’m wearing clean clothes, jeans and a t-shirt, not the sort of thing that would suggest I just came from an all-night party like Roger did.

Roger’s car slammed headfirst into the cement wall of the underpass, crushing the front so the hood is almost non-existent, meaning he truly lost control. I’m guessing he wasn’t sober. His accident is hidden from the freeway but it’s only a matter of time before someone notices. It’s taking all of my willpower not to dial 9-1-1. It feels wrong not to call the authorities.

Although in a way, I am the authority here. Besides, it’s not like it’ll do Roger any good at this point.

Roger ignores me, and steps closer to examine the damage. And then it happens: he spots his body. His face contorts, twists into the most pained, awful expression I’ve ever seen. “Is that… Who is that?”

He knows. I watch the realization dawn on him. Having been out of my body for a panicked two minutes once, I know the feeling all too well. But I got a reprieve and he’s not going to.

END_OF_DOCUMENT_TOKEN_TO_BE_REPLACED

You see all my light.

She remembers pound cake recipes and what to do when my grandfather lost his fingers to the bite of a band saw and how to cut my father’s hair when his feet couldn’t even touch the kitchen floor and the shape of my tiny hand wrapped around hers, my lungs like the wing beats of a hummingbird on fire, long before I should have seen the light of day.

She remembers putting my father in the ground. His ashes are caught in her tear ducts. I see them every time she looks at me and sees his nose on my face, and the waste of his life in my eyes.

She remembers all of it. Stories fall from her lips like spun gold.

But today I said, “I’m your granddaughter.”

And you love my dark. 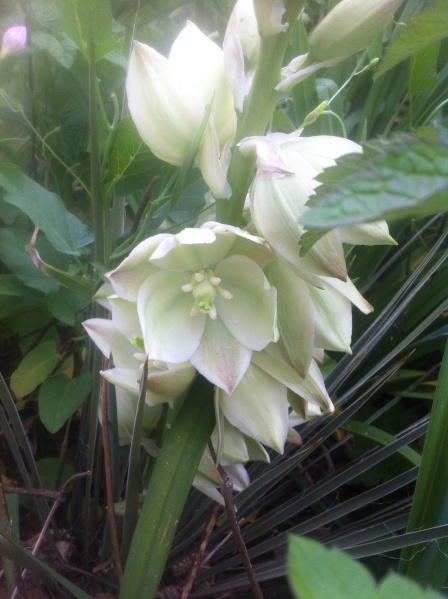 I discovered a website (wordle.net) where you paste in your WIP and it spits out a cloud of the most used words. I love this idea! It’s such an easy visual cue to help edit, or find which characters are important, or write a synopsis (maybe a stretch on that one). Here’s the word cloud for my 76k novel, The Serpent’s Covenant: 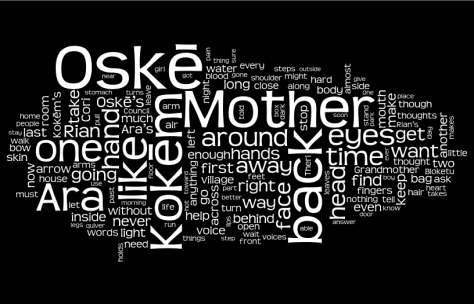 So fancy! I could almost write some slam poetry to it. Like it so much, I’m adding both In Repair:

And Back to You:

Do you have any tips or tricks you use while editing large projects?

Cimmerian Tales
Create a free website or blog at WordPress.com.